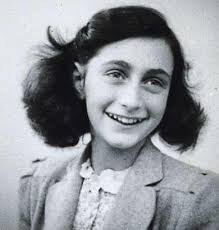 It’s really a wonder that I haven’t dropped all my ideals, because they seem so absurd and impossible to carry out. Yet I keep them, because in spite of everything I still believe that people are really good at heart. I simply can’t build up my hopes on a foundation consisting of confusion, misery, and death. I see the world gradually being turned into wilderness, I hear the ever approaching thunder, which will destroy us too, I can feel the sufferings of millions and yet, if I look up into the heavens I think that it will all come out all right, that this cruelty too will end, and that peace and tranquillity will return again.    -Anne Frank

Anne Frank wrote these words a few short days before her family was found and taken to the concentration camps in the last few months of World War II.  She saw the inevitability of the end of the war coming yet she and most of her family would not live to see it.

As I watch the news lately it is hard not to be catapulted into apathy.  Like Anne,  I can hear the thunder.  Yet the world’s problems seem so big for my voice to be heard against it.  It seems like the the people that need to hear my voice aren’t listening. They are consumed by their own fear.  It is hard to hear each other in the middle of a storm.

Then there are Anne’s words. Her desire at 14 to be heard and to influence the world is inspiring. Her inability to be anything but authentic changed the way people saw the war. She was thoughtful, intelligent and above all just a girl with hopes and dreams like any other.  She is proof of tenacity of the human spirit to fight for good. Despite all probabilities, her voice was eventually heard, not just because she had the courage to write but because others had the courage to listen to the uncomfortable reality of what happened to her and others like her.

I don’t know where our world is going.  I don’t like what I am seeing. Likely it has always been this scary.  I have just been blessed with the privilege of not always needing to notice.  I wanted to share Anne’s words with you in case they inspire you like they do me. Her youthful wisdom is as important today as the day she wrote them.  Her idealism lives on in me.