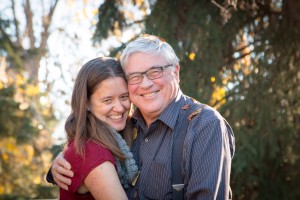 I haven’t blogged in a long time. The reason being is that I really struggled to find anything productive to say. It is hard when you are fighting your own inner battles to focus on things like writing. Every time I sat down to write I felt like a fraud and a hypocrite. Anything I wrote seemed glib and flat. Mostly I have been just putting one foot in front of the other trying to survive. There isn’t anything particularly inspirational about that.

You see over the past year and a half I have been struggling with my own loss. My father died in November of cancer. He was diagnosed early and doctors were able to buy us a precious year and a half before the inevitable came.  That last year was an invaluable gift. We talked, we traveled and he helped tie up loose ends. His battle was brutal but not as brutal as some. While the struggle was long, the end came quick.

I struggle to share this with you. Professionally there is only so much value in sharing my personal life. While my blog is personal in nature I try to walk a line between oversharing and being too clinical. While I was in the middle of the chaos the lines were blurred. Was I sharing for my own therapy or to help others?  It felt safer personally and professionally to remain quiet so I did.

Also it didn’t always feel like my story to tell. My family members have a right to their privacy. My Dad was a private man and really didn’t want anyone knowing about his health. There are many people that get claim to this loss and the story around it. I didn’t want to prioritize my experience above theirs.

But as the chaos wanes I find myself with something to say. While grief and loss have always been one of my professional areas of interest, it is a whole other thing to experience it personally. I understand grief intellectually, that has been helpful. What I didn’t know was how hard it is to juggle my grief and the grief of those around me.  The following are a couple of things that I am learning that I think may be helpful to anyone both grieving and supporting others in their grief.

I want to say that you should always prioritize your grief above others but the reality of this isn’t true. We are all part of bigger family systems.  Sometimes my grief takes priority in my life. Sometimes it doesn’t. My Dad was the one dying. For me, it was hard to trump that. Helping him through that was the first thing on my priority list. Not just for him but because I knew I would survive by doing what I do best, helping. Then when he died others hit the top of the list. My children lost their grandfather. My mother lost her partner of 48 years. They all needed some extra support at least that is what I told myself. They may have different ideas. In my view of the world these are reasonable sacrifices. This is part of my role in my family and I am no martyr. I wouldn’t want it any other way.

That said some days, my sanity came first. Some minutes, or hours I just had to step out of their stuff and into my own. How I chose to prioritize tasks and people was a decision that I made and changed constantly. The people around me had to prioritize things as well. Sometimes these priorities lined up. Sometimes they didn’t. I remind myself even now that everyone has the right to prioritize their life however they want and need to. It is really none of my business. I can like it or not like it but it isn’t up to me.

Doka and Martin (2010) described what they saw as fundamentally different grieving styles. They delineated between what they classified as “instrumental” verses “intuitive” grievers. Instrumental grievers are people who grieve by “doing.”  Their grief is shown through action. They will roll up their sleeves and take on projects. Sometimes these projects were related to the loss though not always.  Intuitive grievers are more emotional. They “feel’ the loss. They grieve through their emotions. Often these styles happened along gender lines.

While I believe that there is more than just two styles of grievers, Doka and Martin’s conceptual framework is useful in understanding families. Families are made up of a variety of grieving styles and they don’t always mix well. Some people barely seem to grieve at all.  This too is Okay. Things get complicated when needs are different. Often families look at each other and think that others are “doing it wrong.”

3. Grief is an individual journey

Grief is an individual journey. You can’t do it for someone. There is no fix. They will have to figure it out for themselves. You can join them on their journey if they let you. Ultimately grief is something that everyone has to find their own way of managing. This is hard, especially if you think you can see an answer that they can’t or won’t. You are not the one in control no matter how much you want to be.

4. Grief will highlight other family dynamics

All families have interesting quirks. There are alliances, communication issues and down right dysfunction in every family. Grief will inevitably bring these to the forefront of relationships. People are often more sensitive and less tolerant in the middle of loss. This is why families reprocess old trauma and argue old battles. This is normal even though nerve wracking. So don’t be surprised if things get a little tense. Even the most highly functional families will likely struggle. It is part of renegotiating new roles. Try to be patient with each other. In some families grief provides an opportunity to move past issues and become closer to loved ones.

5. Your stories won’t be the same

The funny thing about our brains is that they are actually very poor at recalling details of traumatic events. Some things will be etched into our memories with crazy amounts of detail and other things our brain will just make up to suit our version of the story. Each griever will have their own version of events. These versions will have similarities in “facts” but are often pretty different in interpretation. People tend to skew events to reinforce the way they see themselves and those around them. This can cause endless arguments.

This one was easy for me to forget in the depths of my family’s loss. I am just as guilty as everyone else. The reality of how I remember my father’s death is just as flawed and inaccurate as anyone else’s. There is no point in arguing details or interpretation. My story is mine. Their story is theirs. The “truth” is somewhere in there but probably isn’t as relevant as we want it to be.

This can mean many things. Lean in to the grief and not away from it. Sadness is both torturous and gratifying. Grief isn’t always about pain, sometimes it is about relief and gratitude. Feelings demand to be felt so take the time to let yourself feel them. Give the people in your life the room to feel whatever it is that they need to feel. This means make room for sadness but also joy. Feelings are unpredictable and sometimes don’t make a lot of sense.

Leaning in is also about using supports. While my father was dying my partner was an enormous help. He just did whatever needed to be done. I hate asking for help or feeling weak so it was hard to just let people help me. My friends texted and called even when I didn’t answer. They brought lunch. They helped with kids and they just waited for whatever I needed. While the intensity of support has waned. I also don’t need it the same way right now. If you are grieving reach out for the support you need. Lean on the people in your life. You will likely be surprised at the people that are there to help if you ask. You also will be surprised at who isn’t.

Encourage the people in your life to find supports around them. The more connections a person has the better. If you are helping someone with their grief, keep encouraging them to build in more supports. When you have a bad day they will still have others to rely on.

I don’t want to imply that my grief is over. It has been 6 months since my father died and my grief is alive and well inside me. It will likely stay with me for the rest of my life. For me, and for now, the crisis is over. At least that is how I feel today. Tomorrow may be different.